When quality is the difference you're looking for...

Fall Sale! All trees, shrubs, and grasses are 35% off, perennials 50% off. Cash-and-carry only. Plant material purchased at discounted price does not carry a warranty. Excludes hard goods and trees that are growing for next year.
Premium Cedar Mulch 3 cubic foot bags are back in stock.

This time of year it’s not uncommon to see one sickly littleleaf linden in a row of robust companions. Some may conclude that it’s time to call a tree service and find a replacement. After all, anything that can defoliate a tree in one year has to be serious, right? 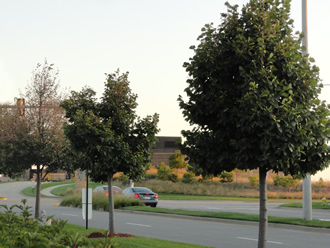 Three littleleaf lindens in a row. The tree on the left has significant damage. Picture taken 9/19/11 in West Des Moines, IA.

Actually when it comes to deciduous trees, defoliation is often not very serious at all. For example, bur oaks, crabapples, and sycamores regularly shed their leaves in spring and summer. Yet, each one of these trees comes back and thrives afterward.

Littleleaf lindens follow the same pattern. Although it certainly isn’t pleasant to watch, littleleaf lindens can lose a majority of their leaves in summer and come out just fine. But does that mean that littleleaf lindens should now be lumped in with other perennial eyesores? No, they shouldn’t. While sycamores and crabapples are mainly defoliated because of fungal and bacterial diseases, the littleleaf linden is actually being picked on by an insect called the Japanese beetle.

As its name would suggest, the Japanese beetle comes from Japan. It is yet one more pest introduced to North America by accident during the 20th century. So far, Japanese beetles have caused more damage in states east of Iowa. However, their impact in Iowa has become much greater in recent years.

As adults, Japanese beetles feed on a wide variety of trees and shrubs. However, in Iowa you’re most likely to see damage on littleleaf lindens and members of the rose family (e.g. crabapples, fruit trees, ornamental plums, serviceberries, roses, and so on). As larvae, they can pose a real problem to your lawn by feeding on the roots of your grass or by attracting animals that will eat them and dig up your yard in the process. 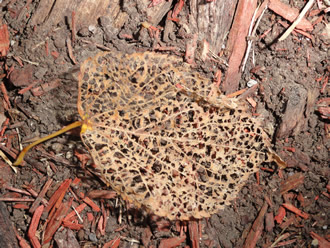 This type of leaf “skeletonization” is characteristic of Japanese beetle feeding.

One curious habit of the Japanese beetle is that they often single out one individual among several seemingly equal options and attack en masse. This often results in one littleleaf linden being almost completely defoliated while its neighbor suffers only minimal damage.

So what can be done if your littleleaf linden comes under attack? You have several options, but to be blunt, most of them aren’t very good:

1.You can spray, but insecticides are dangerous both to humans and to desirable insects (such as bees and butterflies).
2.You can use traps, but they usually will only amplify the problem by attracting more beetles than they catch.
3.You can pick the beetles off by hand, but who has time for that?
4.You can try to get ahead of the curve by applying grub killer to your lawn in spring, but unless you plan on doing the same thing for your whole neighborhood, you won’t be helping your trees.

So then have these insect invaders won? Is there nothing to be done? No. The real solution to this problem seems to be “taking the long view” so to speak. 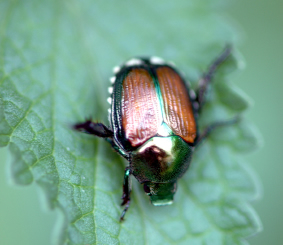 All in all, the damage done to the leaves of landscape plants by Japanese beetles is superficial. So the best course is to watch with some bemusement and hope that next year they won’t return with quite so much vigor. If you can get past the shear annoyance of the situation, their copper wings and lustrous green body actually make the Japanese beetle quite a handsome specimen.